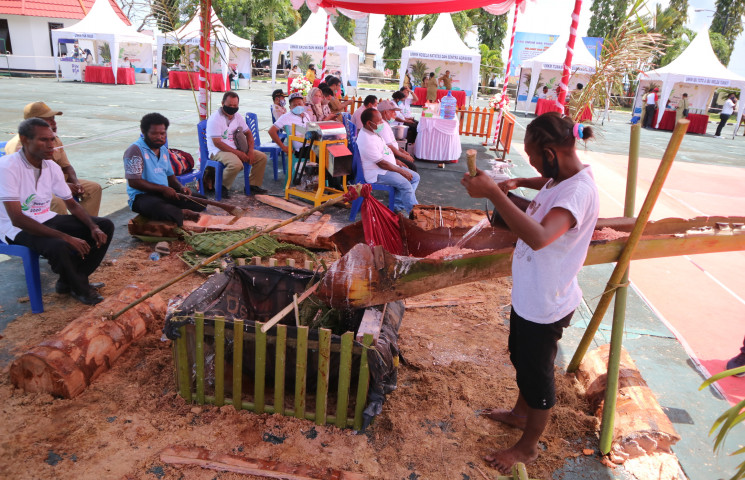 During the Pandemic, the citizen was invited to switch to Sago

The Papua Provincial Government encourages all communities to start turning to sago which is now national foodstuff.

The encouragement with reason because in addition to having to face difficult times due to the Covid-19 pandemic, sago consumption by the public is seen as the best solution to the threat of recession.

Because sago is a local food with an affordable price and can be processed into a variety of rice substitute foods, such as noodles, Papeda, pastries and even ice cream.

"We hope that people in the current covid-19 period in terms of meeting daily eating needs, not always dependent on rice, but should be able to take advantage of the presence of local food such as sago".

"Because we do not ask if tomorrow there is no food supply from outside, then the existence of local food sago can be utilized," explained the Head of Papua Agriculture and Food Office, Semuel Siriwa, Tuesday (20/10/2020), at Sago Nusantara Week 2020 at the governor's office Jayapura.

He invited people from now on to get used to starting from their homes to consume local food, sago and tubers, at least twice a week.

The reason for the consumption of local sago food according to the research is much healthier than rice.

To be known, in the National Sago Week 2020, Papua is recorded in Muri Record for providing 2500 bowls of sago noodles.

Jayapura Regent Mathius Awoitauw appreciated that. Nevertheless, he is not surprised because Papua has an area of 4.7 million hectares of sago land. While nationally, Indonesia has 5.43 million hectares.

"If you look at this data, sago plants are only a few percent in Indonesia, the rest is in Papua. Even Papua is recorded as having the largest sago land in the world"

"That's why I appreciate this activity because it is an encouragement for us to build Papua based on 5 indigenous areas with local culture and potential," he said.

To that reason, he maintained that the government in the provinces, districts and cities would be eager to campaign for local food. So in the future, sago can be the mainstay food of all Papuans and even Indonesians.