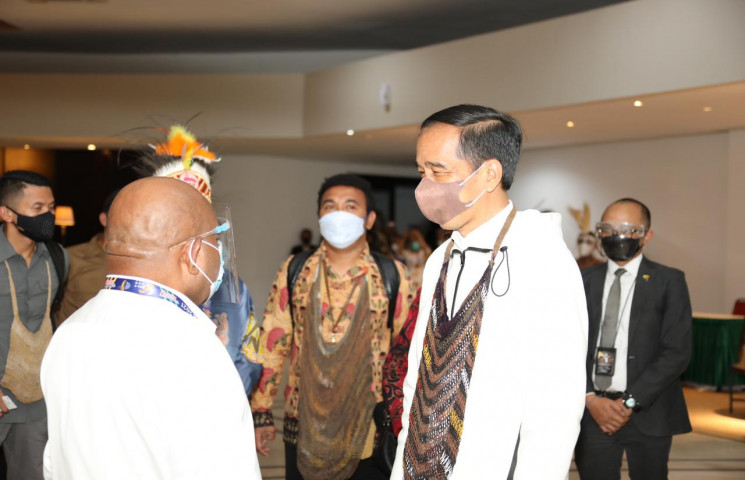 JAYAPURA - Papua Governor Lukas Enembe expressed his happiness and pride over President Jokowi's visit to Papua in the affairs of attending the opening ceremony of the National Sports Week XX 2021.

Moreover, the current arrival of Jokowi at the same time releases the longing with the people of Papua who have not seen the head of state directly for a long time.

"Because the last time Mr. President Joko Widodo treaded his feet in the land of Papua in October 2019," said Spokesman for the Governor of Papua, Muhammad Rivai Darus in Jayapura, Friday (1/10/2021).

President Jokowi and his entourage arrived in Jayapura, Papua at about 16:20 WIT. From Sentani Jayapura Airport, Jokowi directly bought Noken from Mama Papua.

According to Rifai, the Governor thanked the Police Chief and National Armed Forces Commander who have provided a sense of security at the National Sports Week XX Papua 2021 event.

In addition, the Governor of Papua also warmly welcomed the ministers of the Advanced Indonesian Cabinet who alternated coming to Papua to ensure the sectors related to each of the relevant ministry

The National Sports Week XX which will take place on October 2, 2021, at Lukas Enembe Stadium, will be opened by the President of the Republic of Indonesia, Joko Widodo. ***